The Lac du Sautet area in the French Alps combines a beautiful lake, relatively gentle hills as a short prelude to much higher peaks like the Grande Tête de l'Obiou, and a convenient gateway to the stunning high-mountain Ecrins national park. A perfect combination for an exciting weekend with friends, barely one hour drive from my home… 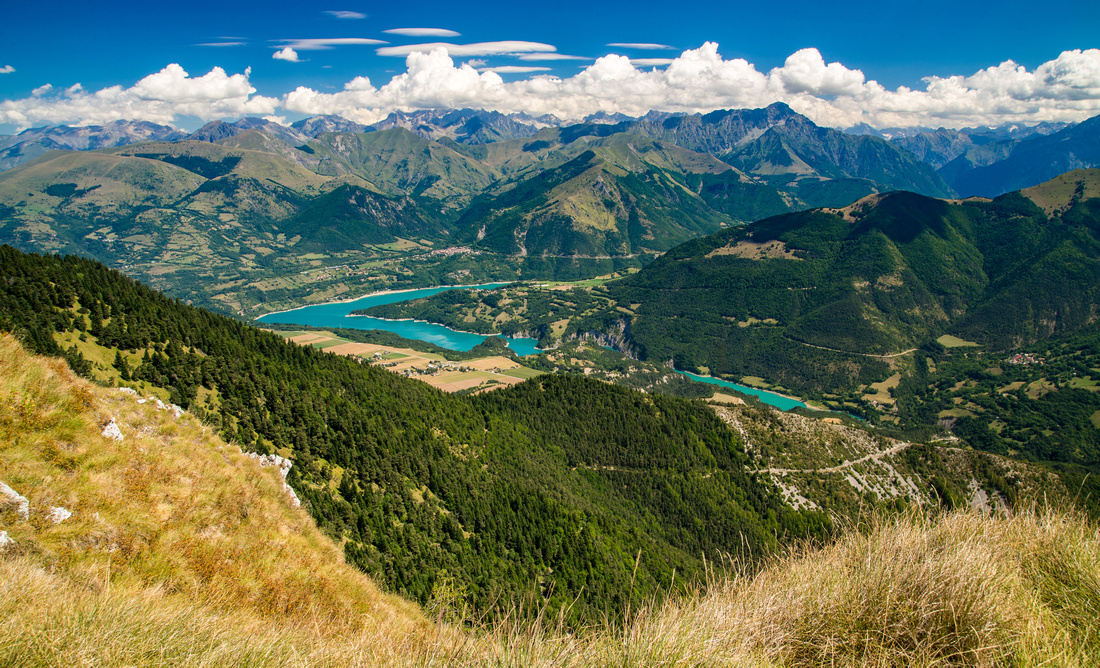 The cabin we rented has a beautiful view of the lake, of the little village of Ambel on the opposite hill, and of the Obiou peaking behind. I noticed that going slightly further West on a narrow path, the view gets even better, with the village church standing out on top of the hill, like nested in a forest shrine. A quick check confirmed that the rising sun would illuminate the Obiou first, then hopefully single out just the church area - while the rest of the hill would initially remain in the shade. Enough to nudge me into getting up in time for sunrise the next morning… It turned out I was right, and the scene was totally worth the effort: 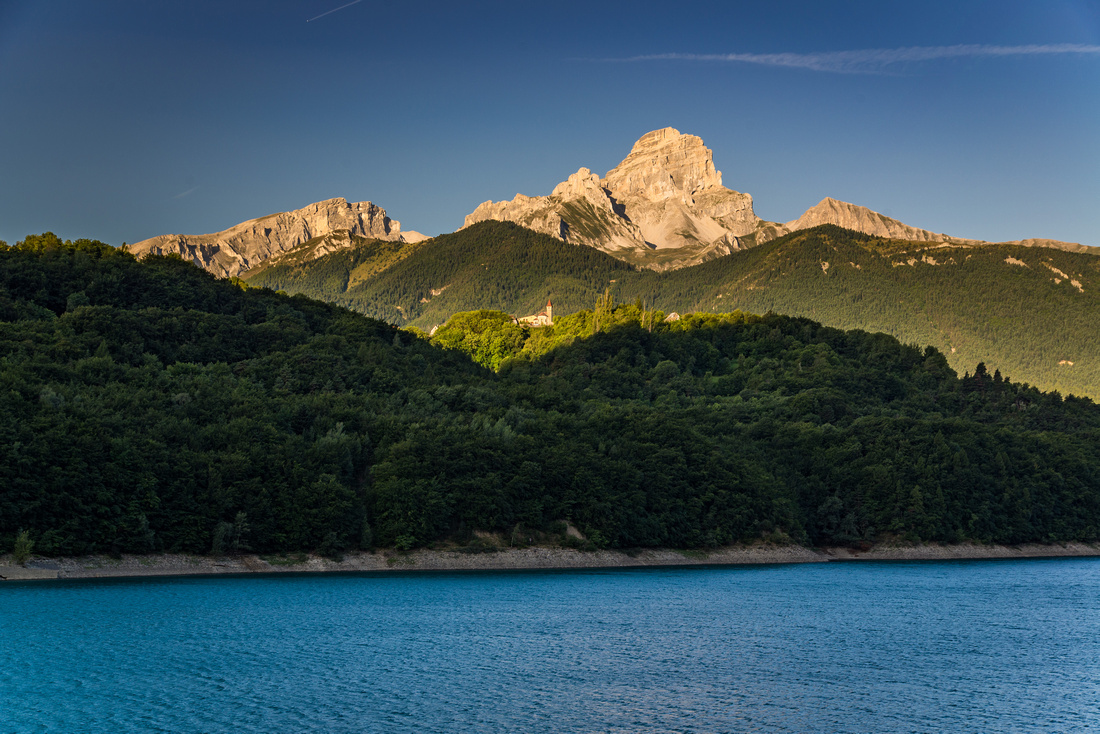 A few minutes later, the shadow had receded beyond the banks of the lake, and the colors were almost... tropical! 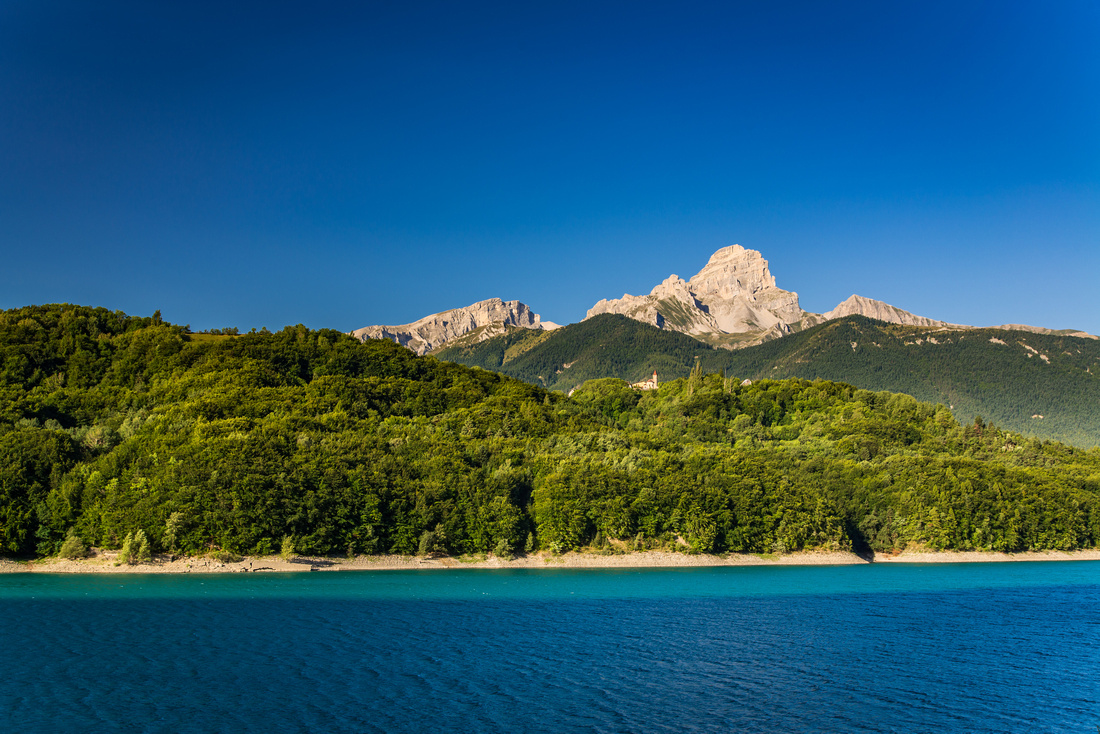 At the North end of the lake, after the dam, the deep Drac valley is a playground for hikers in search of a bit more effort and adrenaline, within the safety of a via ferrata: 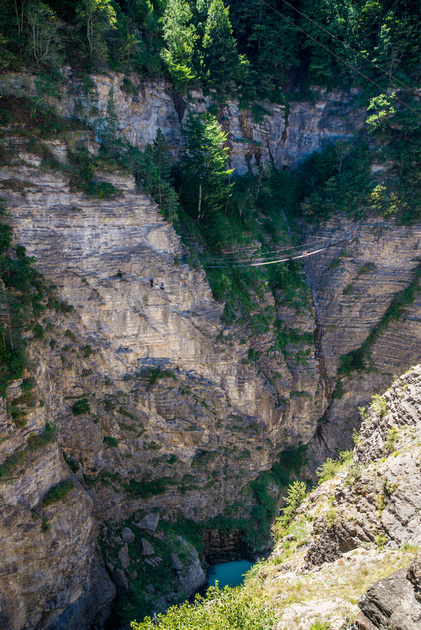 Unlike this daring couple... 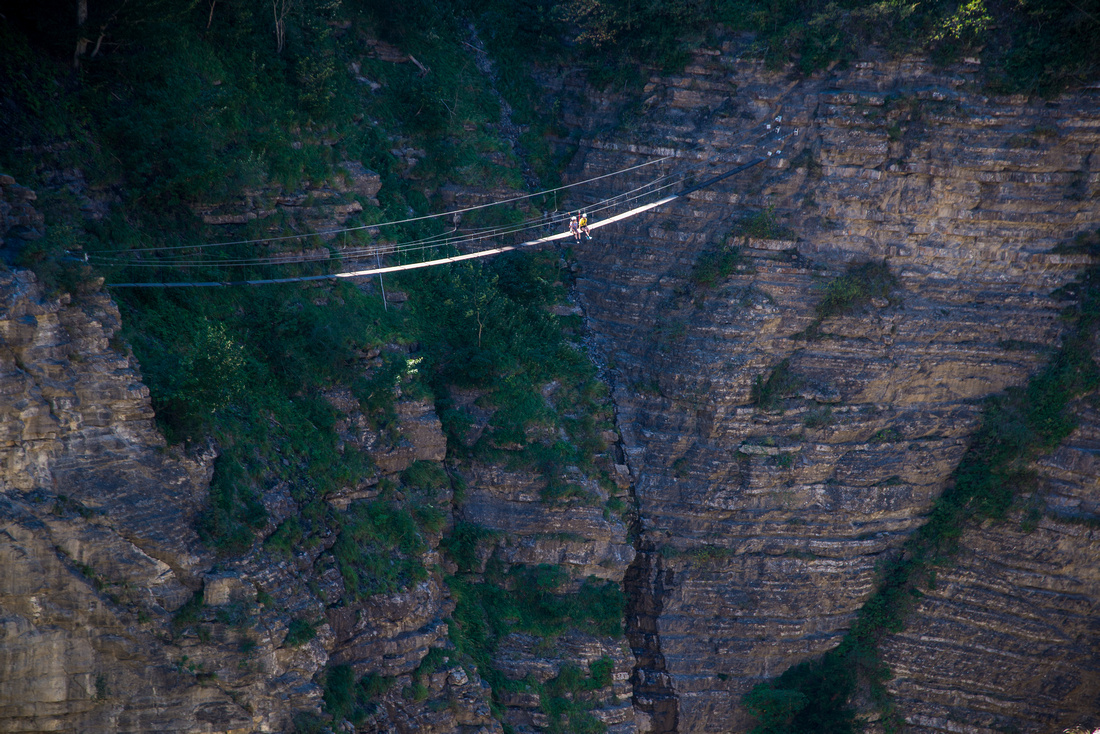 ... we preferred a more gentle exploration of the lake… renting a small boat. 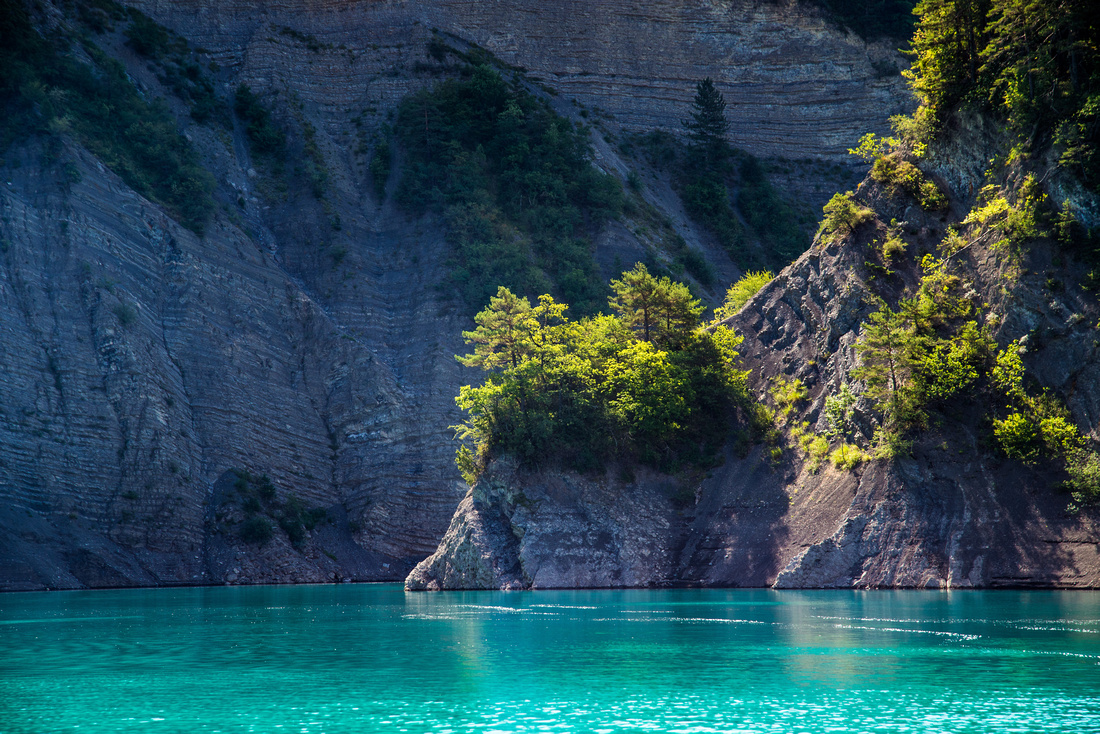 On the South end, the Valgaudemar valley is stunning throughout, with many waterfalls, typical villages and hiking trails. 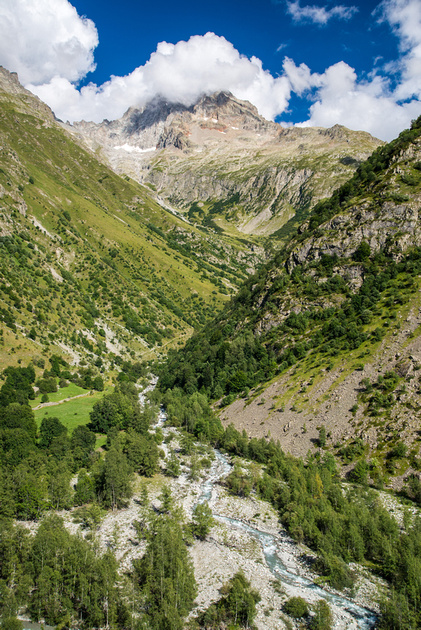 It leads to the Parc National des Ecrins, and ends in the cirque du Gioberney, where rock, water and wildlife meet beautifully - but where the toughness of nature is also very present, with austere barren peaks as a backdrop, and snow still mid-August. 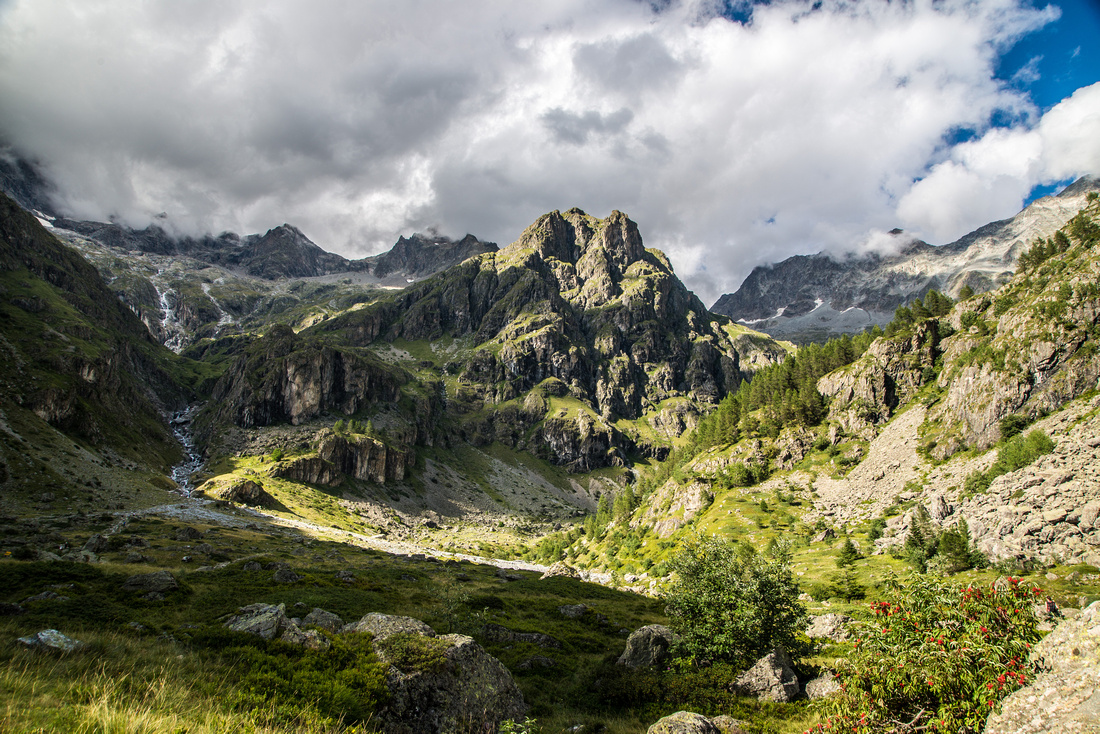 The area also hosts the 2nd largest largest pilgrimage site in France - Notre Dame de la Salette, an impressive basilica built close to the top of a mountain - but I must admit I found more spiritual inspiration in the surrounding nature. 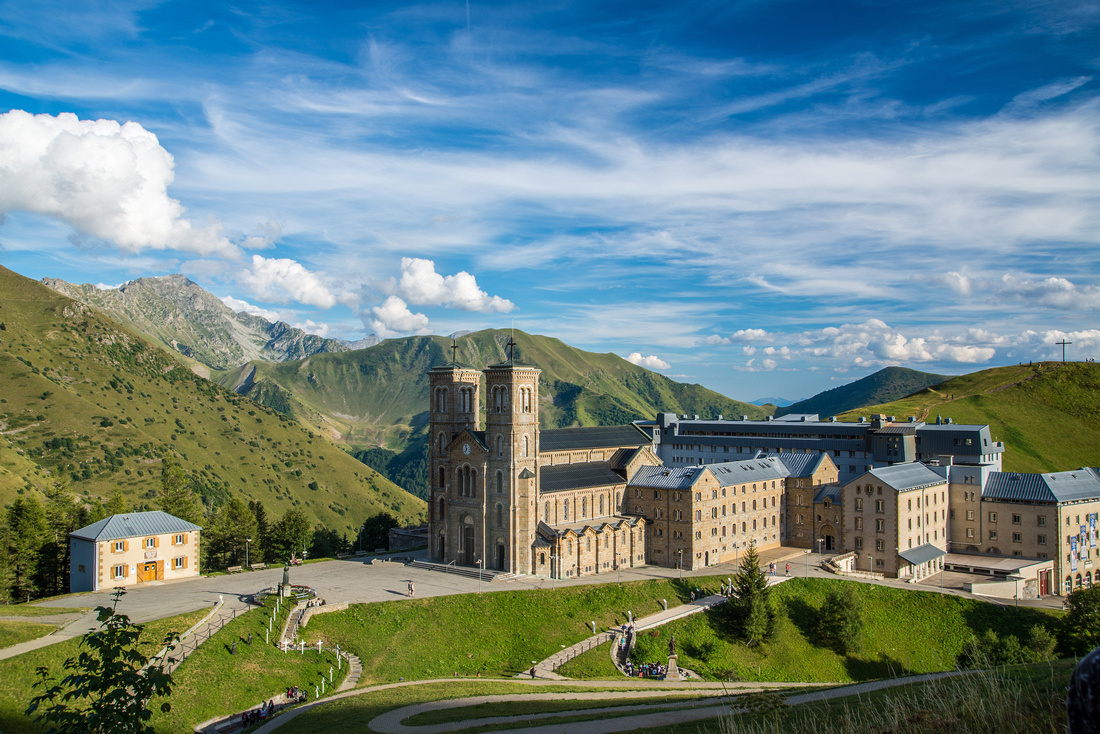